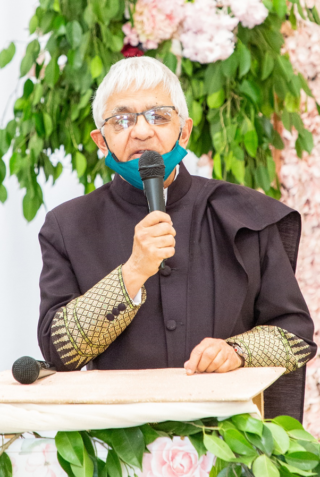 Professor Mohammed Hoosen (affectionately known as “Papoo”) Cassimjee was an icon in the founding and development of family medicine in South Africa. His interests lay deeply rooted in the practice of family medicine as well as the psychiatric and sexual medicine aspects of this discipline. He held the firm view that family medicine academics should continue to practice in their communities to enable them to develop better models of practice and to focus their research on matters which were important for these communities. This was perhaps partly because he had worked in a private practice partnership in Pietermaritzburg for around 18-years prior to entering academic practice. He was a valued colleague and friend over many years.

Prof Cassimjee completed his internship at Edendale Hospital Pietermaritzburg from 1970-1971, after graduating with a medical degree from Ireland, which was followed by one year as a Senior Medical Officer in Obstetrics and Gynaecology at Edendale Hospital. He subsequently decided to pursue a career as a primary care physician and partnered with apartheid struggle icon, Dr C Motala. The practice actively supported activists during the height of apartheid and often provided healthcare and refuge for individuals being sought by the apartheid regime.

Prof Cassimjee’s passion for academic medicine began during his private practice career when he completed a Master’s Degree in Family Medicine at the University of Natal from 1984 to 1986. He completed the Membership of the Faculty of General Practice (MFGP) through the Colleges of Medicine of South Africa (CMSA) in 1988. His thirst for ongoing improvement resulted in him immediately pursuing an B. Med Sc. (Hons) (Pharmacology) degree through the University of Durban Westville from 1988-1990. He also obtained Certificates in Emergency Medicine from the University of Witwatersrand and the University of Natal, and a Diploma in Health Service Management from the University of Natal. He was registered with the Health Professions Council of South Africa as a specialist in Family Medicine; was a member of the South African Medical Association (SAMA) and of the College of Family Physicians of the CMSA. An indication of his activist nature was his service as chairperson of the National Medical and Dental Association (NAMDA) of the Midlands Regional Kwazulu-Natal from 1989-1994.

His passion for teaching resulted in the University of Natal regularly placing students in his practice. In 1991, he decided to pursue a full-time career in academic medicine and was appointed as a senior lecturer in Department of Community Health, Faculty of Medicine University of Natal. Professor Cassimjee was responsible for initiating the process and for establishing the Department of Family medicine at UKZN which was established as an autonomous department on 8 December 1994. He was officially appointed Acting Head in March 1995, Chief Specialist in June 1999, and Permanent Head in April 2000. He retired from UKZN on 31 December 2002, and was appointed Honorary Professor and Chief Specialist: Family Medicine for the Pietermaritzburg Metropolitan Complex and the Western Half of Kwazulu-Natal, from 1 January 2003 to 28 February 2011 and subsequently as Specialist: Department of Family Medicine, Northdale Hospital, from 1 March 2011 to 29 February 2012.

He was the driver behind the development of academic complexes and distant training sites for undergraduate students, interns and registrars in Family Medicine for the UKZN from 2003-2012. He conducted his own research and co-supervised/examined many M Fam Med dissertations; he also presented many papers at local conferences and at international conferences. He was widely published: he authored and co-authored many articles in peer-reviewed journals as well as a book chapter on suicidal behaviour in Family Practice. He was appointed at various times to the editorial boards of the South Africa Family Practice journal, the Saudi Journal of Family and Community Medicine and the Journal of the International Society of Sexual Medicine.

Prof Cassimjee served on many organisations during his illustrious career as he was a true community advocate. He served as an active member of several organisations including:

He was the first incumbent at the Nelson R Mandela School of Medicine (University of KwaZulu-Natal) to receive the Teddy Sarkin Memorial Prize for being the most supportive Academic in the Undergraduate programme, 2000; he also received a Certificate of Commendation for valuable dedication for service excellence to clients at Northdale Hospital, 2005.

He performed service for the HPCSA over many years and in many domains of the organization. He was appointed by the Interim Health Professions Council of South Africa to serve on Technical Group: Vocational training and new systems of registration for foreign qualification doctors from 1996 – 1999 and as examiner for examination for Limited Registration for Foreign graduates from 1996 to 2015. He also served on the Preliminary Committee of the HPCSA from 1999 to 2010 and was appointed to the Professional Conduct Committee of the HPCSA from 1999 to 2015. He was appointed Evaluator to accredit hospitals and other facilities for suitability of internship and vocational training programmes 1996 to 2015 and as an examiner for foreign qualified doctors, amongst others in the programme of Government-to-Government agreements from 1997 to 2015. He also served on the Post Graduate Education and Training Committee of HPCSA (Medical) from 2004 to 2010, the Sub-Committee for Internship Training of HPCSA from 2004 to 2015, as Chairperson of Prelim-Med 1 Committee from 2004 to 2010 and elected to Medical and Dental Board of HPCSA from 2004 to 2010.

His knowledge and insight were highly valued by the National Department of Health where he received a Ministerial appointment to the “Essential Drug List Committee” for secondary and tertiary hospitals 1996-1998; he was also appointed to the Minimum Benefit Committee of the Department of Health in 1999; to the Medical Assistants Programme 2005 to 2011 and as a member of the National Task Team on Male Circumcision – 2009 to 2011. He was part of a delegation which conducted peer review of doctors in Cuba in 1995, 2000 and 2001, and in Germany in 1997. He also served as consultant to the Sick Benefit Fund of the National Union of Leather Workers, 1997 to 2018.

At a provincial level his seniority and insight were much respected, and he was appointed to the Pharmaceutical Coding Committee of KwaZulu-Natal Provincial Administration from 1998 to 2002; as Project Leader for the PATH and HPH projects of WHO (Barcelona) from 2004 to 2011; and appointed by its head to chair Commissions of Enquiry into allegations of neglect and mistreatment of patients and into questionable practices at various hospitals. He was appointed as a member of Task Team for Male Circumcision by the MEC for Health, Kwazulu-Natal, from 2009 to 2011.

He served as undergraduate and postgraduate external examiner at various times over many years in diverse disciplines in the health sciences at the University of Durban Westville, Wits University, University of Stellenbosch, University of Orange Free State, Medunsa, and University Kebangsaan, Malaysia. He served as a visiting Professor to the University of Limpopo in April 2006 and was appointed as Visiting Professor in the Division of Family Medicine at UCT. He was appointed as convenor and examiner for Membership of the College of Family Practitioners – MCFP (subsequently Fellowship of the College of Family Physicians – FCFP) examination at the CMSA from 1996 to 2017, and as moderator for the FCFP (SA) examinations.

The passing of an icon in the discipline of family medicine

Prof Cassimjee left his indelible mark in the hearts of many colleagues and he will be long remembered for his pioneering spirit and his passion for teaching and commitment to patient care. Prof Cassimjee was in his element when he was teaching. His calm demeanour, patience and care that he showed to his students was an inspiration to his peers.

This was one of his favourite quotes: “Understanding is deeper than knowledge. There are many people who know you but there are very few who understand you.”

He is survived by his wife Hawa and children Hussein, Omar, Saleem and Naseema.

Promote optimal health for the people in Southern Africa through advocacy, support and the development of the primary health care team, and the establishment of an equitable, humane and integrated district health care system.